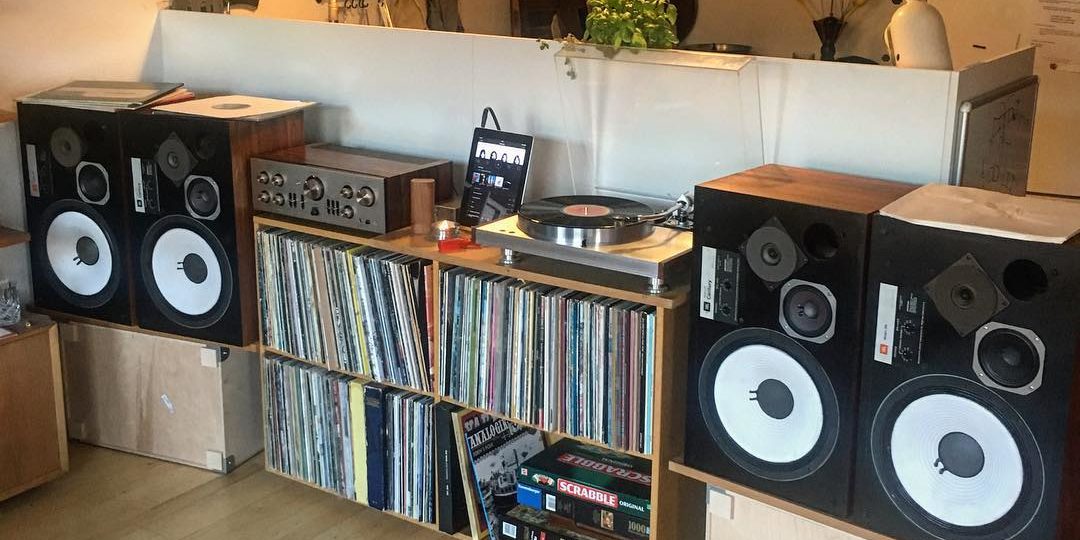 This article will be an overview of the three different major versions of the consumer JBL L-100 speaker, also known as the L-100 Century speaker. This is maybe one of the most iconic and well-known speakers in the world. It is rather simple, moderately priced and easy to get your hands on and they sound fantastic.

They were mid-sized floor-standing speakers – although JBL refers to them as “bookshelf” (that is a big shelf), with 3 drivers, a 12″ bass, 5″ midrange driver and a Dome tweeter. With this article i hope to shed some light over the differences in components, crossovers and sound along with a historical overview.

The article will also contain a little bit of local history, I’ve gathered from my position in Northern Europe.

The JBL L-100 speakers is the consumer version to the JBL 4310 and 4311 professional studio speakers. which are inverted because they stood on the mixing-desk – which in turn might be the reason they are called “bookshelf”.

Just like the 2 different professional models, the consumer models can also be divided into two major versions, the latter with a revision in its production run.

The first version was introduced in around 1970 and the first version is also featured in the 1971 Home Catalogue amidst the Lancer speakers. I speculate this is the version 1, as the other speakers in the lineup are using Le20 Tweeters at this time. The jbl 4310 was still being run in 1971 as the professional version, and it wasn’t until 1973/74 we saw the 4311 being introduced in the catalogues. This correlates well with the JBL L-100 speakers with LE25 tweeters being a part of the 1973 Home Catalogue.

The JBL LE25 tweeter is incorporated into the studio monitor, denoting a new version the 4311

The JBL L100 is updated wiht a new baffle layout and the new tweeter. It needs a new crossover as well, but the foilcal is the same as the original model

The last revision of the L100 – it features a more budget-ish frame on the bass driver, but is otherwise exactly the same – the foilcal now reads L-100, instead of L-100 Century

The first version of the JBL L-100 Century speaker called “L-100 Century” by JBL as a three way speaker with all drivers on the same line. It featured a matte black painted front and oiled walnut-veneered sidepanels.

The bass driver rolls off on its own and runs without a filter.
I don’t think this speaker had the longest production run, and it is very hard to find outside of the US

The finish is still the same, with a matte-black front and walnut sides. The Foilcal is also still the same, denoting this speaker L-100 Century even though JBL refers to it as the L100a speaker.

Regarding the image: The pegs on the front, for holding the front-frame should be white and the JBL Le25 tweeter should have a red surround.

The Late model is the same speaker as the original JBL L100 speaker with a couple of differences: it features black pegs, a different foilcal and a different bass-driver compared to the first model. While it looks similar from the front, the magnet-structure is different.

It is still often called Century even though the foilcal clearly doesn’t list that name. The JBL Logo is also orange now.

I’ve tested L100A and L100A late model at home, and I wasn’t able to find any significant difference in sound quality at all. And unfortunately I haven’t been able to find a local pair of the original L100 Century speakers to try out.

JBL L-100 Century speakers are maybe best known for their very special 70’s decor style foam grilles. What makes these even more sought for is the fact that foam disintegrates with exposure to air, so very, very few of the original grilles exists today, and these are often in a very poor state.

Reproductions can be bought on Ebay, but they have historically been priced around the same price as an entire set of speakers. So while a person might find this price worth it, it can also seem very steep. A lot of L-100 comes without front grille frames or with custom made cloth fronts because of this.

They exists in three colours: Blue, Burned Orange and black.

The Quadrex foam is glued onto a Grille Frame that is made of particle-board with cutouts for the drivers and made pretty with a American Walnut trim all around the edge of the speaker.

In the Quadrex foam is room for the JBL Logo, this logo is the same as the other speakers in this series, however it doesn’t have the pin on the back, and is held on with glue.

As the foam disintegrates, these often times gets lost.

What’s up with those drivers?

The Drivers of the L-100 is a work of art – no more, no less. The details of the LE5 driver and L123 driver basket, while serving only a structural purpose, is made with a high regard of passion and workmanship.

The Bass Drivers is white, from being covered with Aquaplas, which is an acoustic dampening material, originally invented for painting on steel structures in the engine-room on ships to prevent vibrations to mitigate through the structure.

Both the Le5 and the L123A features push pins, in a smaller version, but otherwise the same on JBL’s bigger professional drivers, while the Tweeter features cable shoes, one female and one male to avoid matching the phase wrong when wiring up the speaker.

Another point that makes these drivers so appealing is the fact that all of the drivers uses cloth surround, which doesn’t disintegrate over time, as the foam counterparts – used with care, they will last a lifetime. The only thing that really deteriorates is the foam ring on top of the tweeter, but these are easily changed (Although you need to take care of the voice-coil wiring underneath)

The box; paint and veneer.

The Enclosure of the JBL L-100 is made entirely of Particle board with a Matte-black front and back and sides covered in oiled American walnut veneer. The particle board is not very thick, so while the enclosure is rigid enough, the pronged drive-in nuts for the bass driver, can fall out of their place, as only very little material is actually holding them.

The midrange drivers is in its own little enclosure and the port is made of cardboard. The box doesn’t have any structural support apart from the box itself, and only has little glass-wool padding.

The JBL oil mixture recipe was first described in the 1979 JBL Manual on page 25
It consists of 3 parts boiled linseed oil and 1 par Gum terpentine. For non americans, Gum Terpentine is the same as natural terpentine as opposed to mineral terpentine. The Boiled linseed oil can be changed with virgin linseed oil as well, and yields excellent results – however, the terpentine smells and you need to work in a ventilated area and keep any rags in a air-tight bag to avoid self-combustion.

The L-100 is a very well-sounding speaker! – the box and the crossover is very simple, but somehow works and the drivers sound fantastic! with very little detail lost from the source. They do like a lot of power, and while they can play with authority that shouldn’t be allowed for a speaker this size, it invites you to play loud.

If you do play the speaker loudly you’ll be impressed that it doesn’t distort, which again makes you think it isn’t that loud, because of that it can be hard to play the speaker quietly with background music, as a lot of the detail and range dissapears. I’ve had 4 sets in the span of 10 years, and i’ve loved each one of them. Am I finished with the L-100?

For now at least, I’ve moved on to bigger JBL speakers, but this is where it all started for me.

in this video I show a cosmetic restoration of a pair of JBL L-100 Century (L100A Version 2) speakers.

The restoration is confined to the cabinet, and repainting the woofer driver aquaplas, because of a tear in the aquaplas, and subsequent discolouration.

For other guides and historical product overviews, check out the : SME 3000 Series Tonearms – A guide or the category: overview