Back in 2008 the vintage-hifi people in Denmark (who at this time were gathering in the vintage-subforum of hifi4all.dk. Years later we broke free and created vintagehifi.dk) met up at Hald Manor House in Jutland for 2 days of vintage-hifi show and tell coupled with drinks and good music.

Back in 2018 I was just a young man who had been interested in vintage-hifi for some time and who knew a handful of the people in this group. I went to Hald and one of the presentation where 2 of my now dear friends who collect vintage Marantz equipment. This presentation was an eye-opener and has put me on a trajectory I am still on, in regards to my Hifi-journey. The presentation was a showcase of some of the very finest and most rare Marantz equipment, including a complete tube setup Marantz 7 and 8B but also the early Model 15 and 7T.

The loudspeakers were the JBL L100 Century and JBL 4311 (same speaker but different enclosure) and the sources was a big Luxman PD-444 turntable with Fidelity Research FR-64S and Ortofon MC-30 cartridge. Because of an issue with table-space, the turntable was placed directly on top of the speakers – not something anyone would recommend.

The first number that was put on was Corner Pocket, played by The Harry James Orchestra on the Sheffield Lab direct to disc “The kings James version” record. I was simply blown away!

Without any subsonic filtering there wasn’t any feedback into the turntable. The volume was loud and everything stood clear and perfect. It sounded good – very good!

From that event and in many years to follow, I have been collecting towards that experience. The first was the JBL L-100 speakers (I have had 4 sets before I upgraded to the 4343 speaker), I’ve had Marantz 250 and 3300 and Marantz 16 and 33 and for over 8 years I’ve had the Luxman PD-441 turntable (the smaller version of the PD-444), first with a SME 3009 Series II tonearm, later with the Fidelity Research FR-64 tonearm, both sporting the MC-30 by Ortofon.

A couple of months ago, I got the chance of buying the PD-444 showcased at that very first event with the Fidelity Research FR-64S tonearm. I am over the moon – there isn’t a record player I have ever wanted more than this particular direct drive turntable. It is a beautiful and very advanced turntable, and the best part – It fits a 12″ tonearm natively while at the same time having a lid! something only a very few turntables do.

Both Turntables were a part of the same series released in October 1977. The PD-441 and PD-444 are made the exact same way, and is for the most part identical.

The chassis is made of iron slabs around a plywood core and with the big profiled aluminium top. The platter is heavy (2.5Kg!), but the system also contains what they market as “Load-free spindle” This is a system where the main bearing spindle contains a magnetic counter-force, making the load on the bearing 1/5 of the mass of the platter. This way the bearing is not worn in the same way as a normal bearing, but you retain the high moving mass of the heavy platter.

The drive system is direct-drive with a quartz-locked speed control, which ensures a fast and trouble-free operation. Any micro-jitter from the Quartz system are mitigated in the heavy platter and from my measurements (of a 40 year+ system) I measured +/- 0.014% Wow/Flutter on the PD-441 and 0/-0.011% on the PD-444. Which is well within any kind of acceptable specification ( and below the spec of less than 0.025%)

The large cover is made of three pieces of think acrylic sheets, and is bent on the front and back cover. The hinges are spring loaded and is able to hold the large lid of the PD-444.

The motor drive was made by Mitsubishi and bears two names: MDS-102C and MDS152C – on my machines one code is stamped on the top of the platter-bearing assembly, and the other code is on a label on the motor-cover underneath. Some references these codes to mean either MKI or MKII – but that would be weird as my original machines are sporting both.

The Quartz-locked system can need some technical attendance after all these years, but the schematic is simple and should be rather easy to service.

The two sidepanels on the chassis is made of MDF panels covered in vinyl imitation rosewood. These are usually damaged in some way, minor or major but because of the weight of the table, the corners of these veneered pieces are often torn or damaged slightly. For my table I am thinking of making a couple of extra sides with real veneer.

The Luxman PD-444 is identical to the PD-441 except it contains another slot for a 12″ tonearm and a switchable tonearm selector, making it possible to run two tonearms through the same step-up or phono receptacle on your preamp.

Both the PD-441, PD-444 and the PD-555 turntable all uses the same armboards. The armboards all made of a carrier base called TD-X and separate armboards that you put on top and screw in from the underneath. There are a total of 4 different of these armboards, each one supporting a different group of tonearms – it should be notet that the only difference between TP-LH and TP-LS is that the TP-LS features 4 tapped screw-holes for mounting SME tonearms, the hole diameter is the same.

Since the tonearm base can be moved and fixed in placed in the slot it sits in, the turntable supports a wide range of different tonearms, both the ones used for example in the Tonearm manual shown above, but also a lot of newer tonearms. 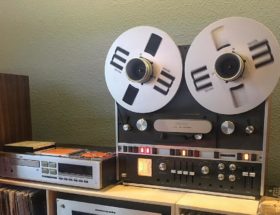